Although the main goal of this latest overseas trip was to visit Oslo, Norway to interview leaders about the city's plans to go car-free in the city center by 2019, I knew I'd have the opportunity to visit somewhere else (very quickly) to shoot a few Streetfilms. Nearby Denmark was the obvious choice where I only spent a little over two days and it yielded a crop of Streetfilms substance (along with a short side trip to Malmo to also see the bike world there.)

Two of the films are already published on the blog, but two others new to you aren't.  The first was a short bit (above) where I got to talk to James Thoem, a Project Manager with Copenhagenize Design Company, about the key safety measures installed at what some claim to be the world busiest cycle intersection with over 42,000 users per day. The things he talks about would certainly nearly illuminate "right hook" crashes in the United States, but of course something tells me the incredible volume of cyclists also is a factor in driver's ability to sit patiently. I did a popular montage on that on my last trip here.

The fun montage above is just something I crammed together on my journey between Copenhagen to Oslo. I realized as I was out shooting footage that I was collecting an insane amount of children and dogs riding along in cargo bikes and such. It could be because I was missing my little boy (who recently took his first bike ride ever) and envied all the families. I surveyed fans on Twitter and asked if they would like to see such a montage. They enthusiastically said yes, so I obliged.

Here's just something I saw while out with James. A construction crew digging and transporting dirt.  Everything proceeding with very little fanfare. It looked all very professional and yet kinda scary. I took one ride underneath, which although the crew used due care, also seemed very borderline dangerous. Yet, nice to see life and work proceed without alarm. What do you think? 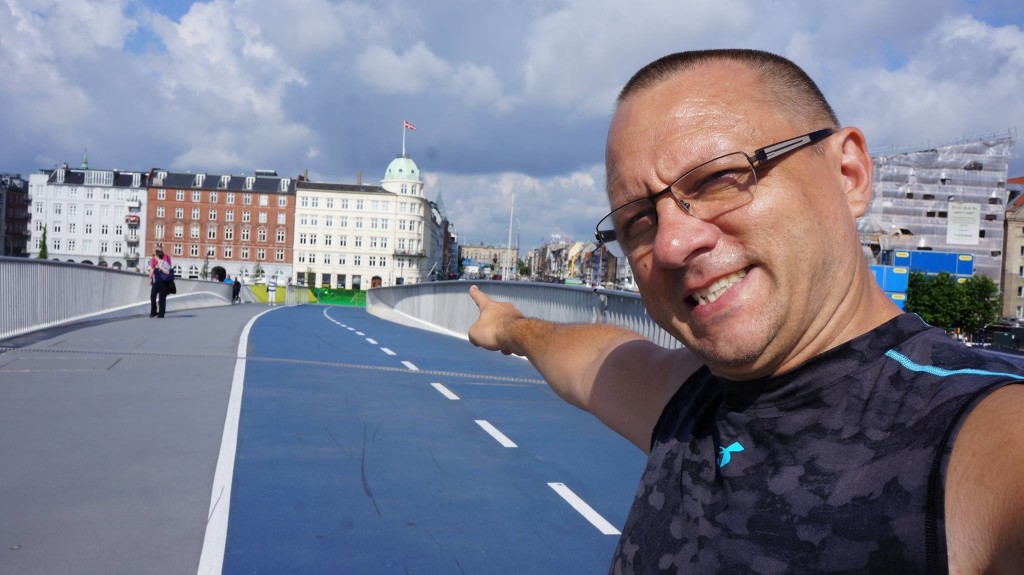 There's me above checking out the newly opened "Kissing Bridge", which was delayed for many years. I'm not gonna say too much here about the final video since it has its own blog entry, but Marie Kastrup from the City of Copenhagen, showed me some wonderful hospitality gave me a whirlwind tour of the newest car-free bridges in Copenhagen. This is the result.

But the video itself should prove very valuable to cities across the globe as conversation starter. Here in NYC while we are debating whether or not we could possibly widen the Brooklyn Bridge pedestrian and bike path say 3 to 5 years down the road (if at all), We need to look at what bridges could we build in NYC that would greatly enhance transportation for cyclists. The Move NY/Gridlock Sam plan does float the possibilities of some car-free crossings, but one has to wonder if it would be seriously ever studied. If we were in Copenhagen, there would likely already be plans for multiple bridges going in.