Last night, I was one of 1200 lucky ticket holders attending "How New Yorkers Ride Bikes" a David Byrne presentation at Town Hall as part of the 2007 New Yorker Festival. Stuffed with laughs, entertainment, and bicycle inspiration, it was hard not to be psyched about the current state of cycling in NYC. In fact, my pyschedness level is off the charts! 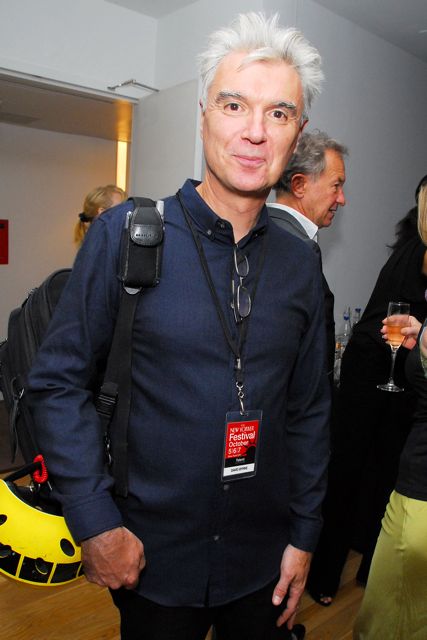 Of course our MC for the night, Mr. Byrne, who has been using a bike for transportation for 30 years, pedaled to the theater. In fact, the night started with helmet cam footage he shot as he biked thru Times Square to the venue. Some Byrne-musings which drew the most applause/ laughter as he navigated the entanglement of peds, cars, and street furniture included: "...once you get used to it, riding thru the city gives you a nice jolt of energy", "42nd Street would make a nice pedestrian mall", and probably the biggest laugh-getter, "if this was a bike lane, there would probably be a truck from New Jersey parked in it."

Mr. Byrne, dressed in black and sporting his cool taxi-yellow bike helmet (see our previous StreetFilm here) then rode onto the stage and locked up. Moments later Hal Ruzal, NYC bicycling icon and mechanic at Bicycle Habitat, emerged from behind a curtain to pick his lock with a variety of tools. Mr. Ruzal's advice on not getting your bike stolen? "Have a bicycle lock that is real expensive, and a bicycle that's really cheap." True dat. 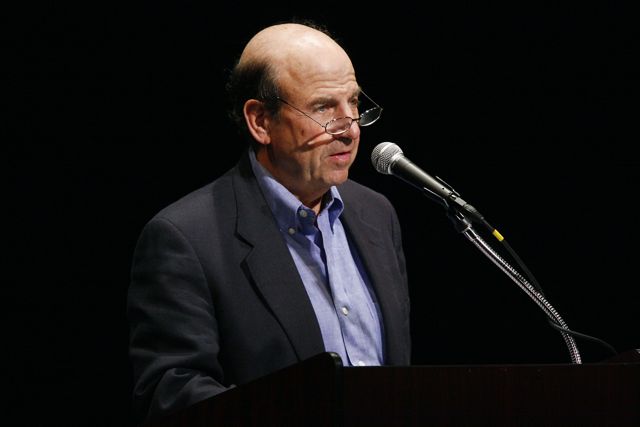 Next up was New Yorker fixture Calvin Trillin (above) who shared his humorous reflections on a lifetime of city bike riding. On the flatness of the city: "I have been riding a bike in Manhattan for 40 years, and I have yet to shift gears."

Charming Danish architect Jan Gehl extolled the many benefits of biking in Copenhagen, where 38% of commuters ride: "This is important because if you see a pretty girl, you can easily jump off the bike and start kissing." (Note: if this phenomenon can be documented, I may well have to move to Denmark.) This was at least the fourth time I have heard Mr. Gehl's stump speech and even though he went well beyond his alloted ten minutes, its an infectious message that never seems to bore. 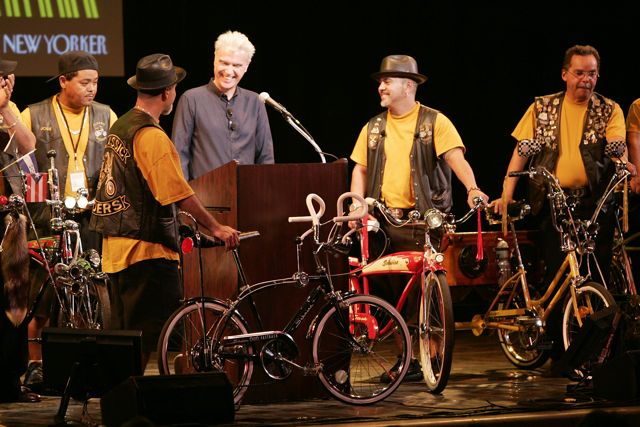 After a brief appearance by the Classic Riders Bicycle Club (above with Mr. Byrne,) Buck Henry trotted out to read from Samuel Beckett's "Molloy". Mr. Henry was game, but the length of the piece seemed to lose much of the crowd. However, the mood was about to change.

Mr. Byrne then introduced Jonathan Wood, Deputy Chairman of the Warrington Cycle Campaign, who brought the house down. The campaign trumpets "Facility of the Month" - which features humorously poor cyclepath designs. Mr. Wood, with pitch-perfect, deadpan delivery commented on a series of some high - or maybe low(!) - lights since its debut in March 2001. No words I write could convey the stitches he had us in. Check out the November 2005 entry (right) and then try to imagine a clean-cut English bloke delivering this sarcastic line regarding a cyclists dismount sign, "All but the most skilled cyclists would be wise to heed this advice."

We're told a book is on the way, it'll be on my holiday shopping list.

The Young@Heart Chorus, a bubbly group of singing seniors from Northampton, Mass then charmed the crowd with their version of Queen's "Bicycle Race." From there it was on to an Academy Awards-like montage of bicycling in the movies that - I am told - was movingly scored by Mr. Byrne himself. Biggest cheer? A clip of bike-riding Kermit the Frog from the Great Muppet Caper.

Following a short slide presentation of bike facilities he has experienced around the world, Mr. Byrne yielded to a panel of advocates and city experts. Some useful quottage:

The Young@Heart Chorus (whose ages span from 73 to 88!) came back out for two final numbers to close the show with Mr. Byrne accompanying on the finale "One Fine Day" which was nearly worth the price of admission. All in all, a memorable night and one that shows that bicycling continues to be a burgeoning force here.

Synergy folks. Go out and ride, take over the planet.