Released in only a handful of theaters this summer with nary a cinematic sound, "Noise" stars Tim Robbins as a New Yorker whose life becomes upended when the decibels of city living infringe on his daily routine. Now on DVD, hopefully "Noise" will allow more advocates to queue it up in their Netflix accounts. 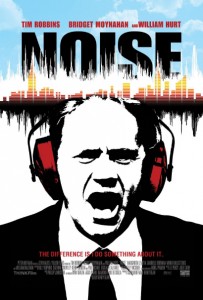 When noisy car alarms and midnight building security sirens become too ubiquitous to ignore, a frustrated Robbins becomes "The Rectifier" a street vigilante who takes the law in his own hands by silencing offending devices. For the most part this involves smashing in car windows to disable shrieking alarms, then leaving a note and affixing a yellow emblem to his deeds. In flashbacks we witness his progression which begins more benignly: he starts letting air out of tires, but moves on to keying cars and then advances to using baseball bats, hammers and chisels.

After hundreds of incidents, "The Rectifier" becomes a hero to the people (though thanks to the very low budget something we see few signs of) and a thorn in the Mayor's side, played by William Hurt. Eventually, Robbins' character attempts to go a different course when his doppelgänger is uncovered by a young love interest who then convinces him to channel his passion more constructively.

Not giving anything away here, but a brief wink near the film's denouement allows you to visualize two different end scenarios. I laughed at how guillibly I fell for it.

The film is a very hard one to classify, zigging between comedy, drama, and political statement which keeps things heading in unexpected directions, but essentially detracts it from being a home run in any category. It feels as if the comedy was pruposely dialed up to make Robbins' character a little more likable and accessible.

There are also mega leaps of logic, one being how the NYPD has no leads on the identity of "The Rectifier", but in the end just sit back and allow yourself to live vicariously thru Robbins' actions. It is what it is, an enjoyable indy film with good intentions and performances, but it's easy to see why it did not do well in theaters.

*On a side note, though an entirely different theme, "Noise" reminded me of "Hero At Large", a John Ritter comedy vehicle from 1980 that I must have watched 200 times on HBO as a kid. Both pictures feature small casts, small sets, and involve someone taking the law in their own hands in NYC.

Netfilx Recommendation: For sure.

The Streetfilms Skinny: The poster is terrific. I want one!