NYC DOT is on a very productive roll recently with many innovative projects going on in New York City. I guess this is my way of saying thanks.

I was away when NYC DOT officially debuted the new shared space (5 mph) street on Broadway near Madison Square Park. So I decided to get a quick look on Friday and, well, it works extremely well for NYC's big foray in to a new kind of street design! It'll be interesting to see where they might try this in the next few years. (And of a quick reference, check out this nearly ancient Streetfilm from when Madison Square Plaza was first created back in 2010!)

Another debut I missed due to travel was the fantastic two blocks on Broadway that have been transformed into car-free urban oases. It's called the Garment District Urban Garden and has been in the ground for nearly two months. I don't know why it took me so long to get over there (maybe because Broadway's eventual foregone destiny is to be car-free?) but the installation ends on September 1st. So get your posterior over there to see it. Lunchtime is fantastic!

To many, this green-paint-delineated, Queens Boulevard bridge path over the Sunnyside rail yards might night seem like a really big deal, but for those of us who ride it we've been made very, very happy. It's been many years coming and now that it is properly marked with #freshkermit, pedestrians are sticking to their posted side making the riding experience much less frustrating and smooth. For reference: if you are not familiar - this section is a direct link to the Queensboro (NOT Ed Koch!) Bridge ped-bike path. See some history on that here via this short Streetfilm!

And finally NYC DOT's amazing Summer Streets continues! An event I have never missed getting out to and enjoying since 2008! (Even being in tremendous pain for 2011 and 2012 following a hip injury due to a car crash and resulting surgery, blood clot and compartment syndrome!) We've even brought my son each year since he was born.

The above compliation is really just the result of cruising down on my way to another shoot. I picked up about 20 shots and threw together this montage for future b-roll use, so figured why not share! The only suggestion I have is one I have every year: there needs to be more events and the course needs to be significantly lengthened. It's popular! It's getting ridiculously crowded at some bottlenecks. I hope Commissioner Trottenberg can give us something even more great in 2018! 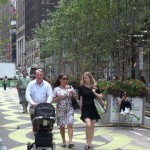