Lexus ES: Is this the first U.S. car commercial filmed on a street with a protected bike lane?

Since I've been doing lots of research, analysis and interviews for a future Streetfilm looking at car commercials, this recent Lexus ES ad in heavy rotation during football Sundays really caught my eye.  If you are a cyclist or urban planner take a 30 second gander.  It just might be a first (at least in the United States): a major car company deciding to showcase their car on a complete street!

Yes, "Infinite Glances" is your typically slick, highly-manipulated production from the car world, but it's kind of exciting to see the protected bike lane representin' on the right hand side of the screen. From the look of the city, I knew it was likely shot in Vancouver. And after freeze framing the video and looking at the street names it's apparent this was shot on Vancouver's Dunsmuir Street, which does indeed have a wonderful protected bike facility. (Streetfilms Note: we have a video debuting shortly on bicycling in Vancouver, from the Velo City 2012 conference in June.)

However, delve a little deeper into the photoshopping and F/X and you'll find that the advertising world just can't leave well enough alone.  Although they have nicely populated the streets with pedestrians and cyclists, all four cyclists depicted on Dunsmuir are riding outside the bike infrastructure!  Here's two of them riding in the road instead of behind the green planted buffer to our right: 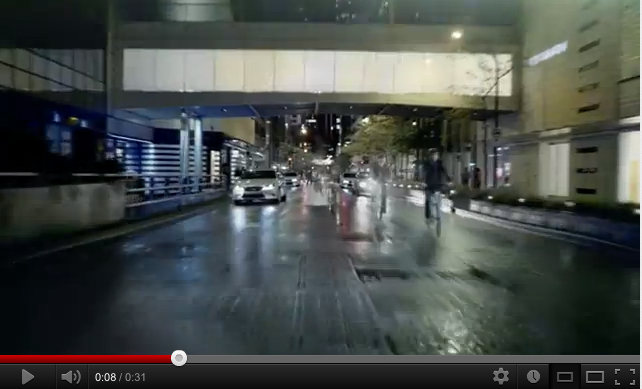 But even more alarming?  TWICE in the video they have cars driving the wrong way up the separated bike lane!!!  See those below: 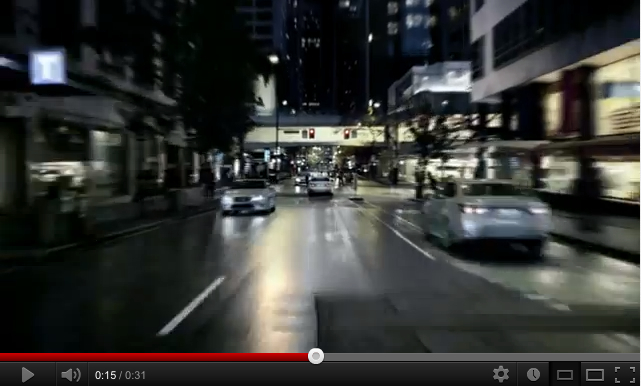 My first excited impression (and maybe too hopeful) was that perhaps this advert was a nod by Lexus that streets are for more than automobiles. But after looking at the manipulation closer it's probably just that it's really just a nice-looking, busy-with-people-city-street to use as a canvas to show off the Lexus. At the end the voiceover intones, "This is the pursuit of perfection." But it's obvious there are some glaring errors in the Lexus photosim technology.

Still with all that said, I think most will agree it's far better than most of the horrible car commercials populating the airwaves. Your thoughts?