I just returned from a very invigorating jaunt to Salt Lake City, Utah to attend the CNU 21 conference. A day earlier, I was a special guest presenter of Streetfilms University at the Streetsblog Network Training which brought in 15 bloggers and advocates from around the U.S. to learn some of the expertise we have in covering the livable streets movement.  There was an eclectic lineup of speakers including Streetsblog founder Aaron Naparstek, traffic engineer Ian Lockwood, the master of Tactical Urbanism Mike Lydon and former Milwaukee mayor and CNU President John Norquist.

Streetfilms Shortie - Checking out GreenBike in Salt Lake City from Streetfilms on Vimeo.

The summit was an enormous success. And amongst the seriousness there was also adventure and camaraderie. For one, we all decided to take a group spin on SLC's GreenBike, a bike share system with just ten stations and 100 bikes which debuted in May. It may pale in comparison to the 6,000 bikes on the streets of New York, but there were copious folks using them (and many others inquiring.)  Since the bikes are from B-Cycle they offer a slightly different feel and look then NYC's Citibike.  See for yourself in the Streetfilms Shortie above, but the front racks support carrying up to 20 pounds which scores huge points with this filmmaker from New York.

Salt Lake City is fascinating on many levels. It's taking major strides in expanding transit (which you'll see more of in a Streetfilm very soon) and is erecting some great bones to a system with it's newest light rail lines (the green line to the airport just opened last month), it's Frontrunner commuter line service (opened in 2008 and just added 8 new stations at the end of last year) and a Streetcar line which is under construction and due to open by the end of 2013.

There also is a healthy bike culture.  Lots of fun things to see. 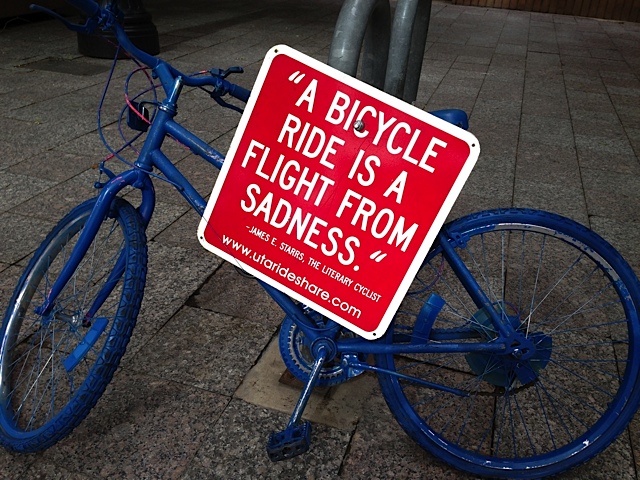 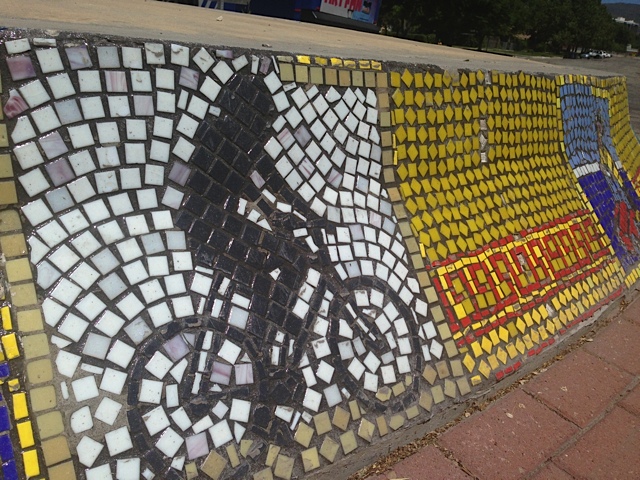 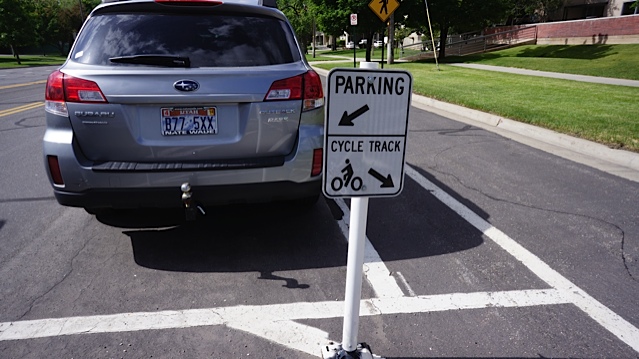 The above image is from SLC's first experimentation with protected bike lanes and I really loved this signage. It's to the point and I would love to see it standard for these types of facilities.  Especially initial deployments of the first protected lanes in cities where it's a fresh concept. Anything we can do to reduce the ire or confusion of motorists, I think is a swell idea.

But Salt Lake City still faces many challenges. It has very, very, very, l-o-n-g blocks. And as a pedestrian it can feel like an eternity until you get to cross streets that feel much like highways. And it's not only in the downtown. I ventured out to see many of the neighborhoods and was astonished:  I've never seen road widths in communities of this length (which dates back to the settlement of SLC). You could seriously probably land an airplane. Play the above video to see the expanse of asphalt!

In one section north of the city, I saw probably a dozen of these consecutively. In the above photo you will see I did come across one with a huge green median filled in and what a different experience it proved. I'd love to see some sort of depaving action on these very low travelled streets.  Imagine every homeowner getting to grow a garden or vegetables on their streets?  (With still plenty of room for cars.)

But a voice in the back of my head tells me the residents may see nothing wrong with this setup. Which is fine, too. You can't impose a solution on a community which desires none.  Still, just imagine how much cooler these homes would be during the hottest months of the year with 3/4s of that asphalt gone? I'm just sayin'.