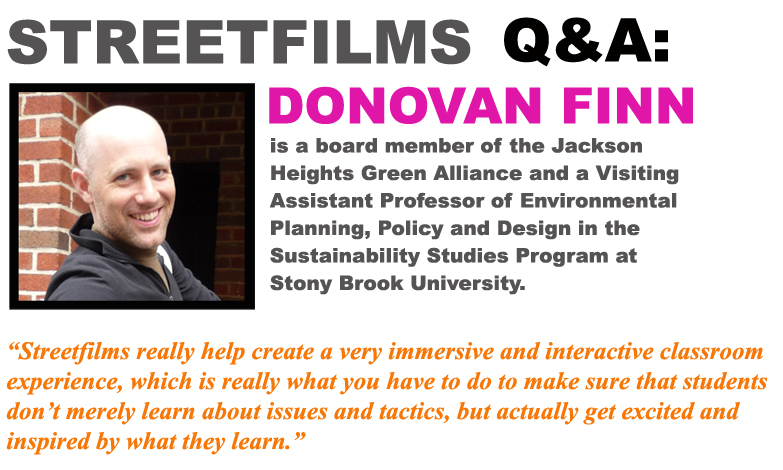 Streetfilms:  The 78th Playstreet in Jackson Heights has been an enormous success the last few years.  How have the Playstreet Streetfilms helped?

Donovan Finn: I don’t think you can easily quantify how much mileage we’ve gotten out of those two videos. Locally, we’ve promoted them on our website and community listervs and bulletin boards  to help illustrate to our neighbors, that, yes, what we’re doing here is important, it’s challenging, and it’s something that is recognized by people outside our neighborhood as being interesting and worth emulating. I think Jackson Heights residents have so embraced and adopted the Playstreet as a permanent part of the neighborhood landscape that they don’t realize how much work has gone in to making this project happen in the first place and to sustaining it. Seeing the Streetfilms hopefully makes people realize that this project is helping set an important precedent and that it’s a rare and precious commodity in this city.

SF:  As an educator, you've also used some Streetfilms in the classroom.  What has that been like?

DF:  Streetfilms are a great teaching tool for a number of reasons and they have a lot of advantages over some of the limited DVD options offered to educators for urban planning courses. First, they're current, and the variety of topics and cities covered makes them extremely versatile. They are brief, so unlike traditional hour-long educational DVD’s I can use them to illustrate just one specific topic quickly and still have time in class to do other things. Also, while they are packed with information, Streetfilms are also just a lot of fun to watch. The opposite of dry, boring educational films, they are witty and full of powerful graphics and quickly paced and just entertaining as well as informative.

SF:  How do your students react?

DF:  It’s no small feat to keep modern students awake & engaged and not texting or otherwise half-committed to the classroom experience but Streetfilms are a great tactic for that. Streetfilms really help create a very immersive and interactive classroom experience, which is really what you have to do to make sure that students don’t merely learn about issues and tactics, but actually get excited and inspired by what they learn.

Looking for ways to use Streetfilms in your classroom?  Check out the Moving Beyond the Automobile companion curriculum here.