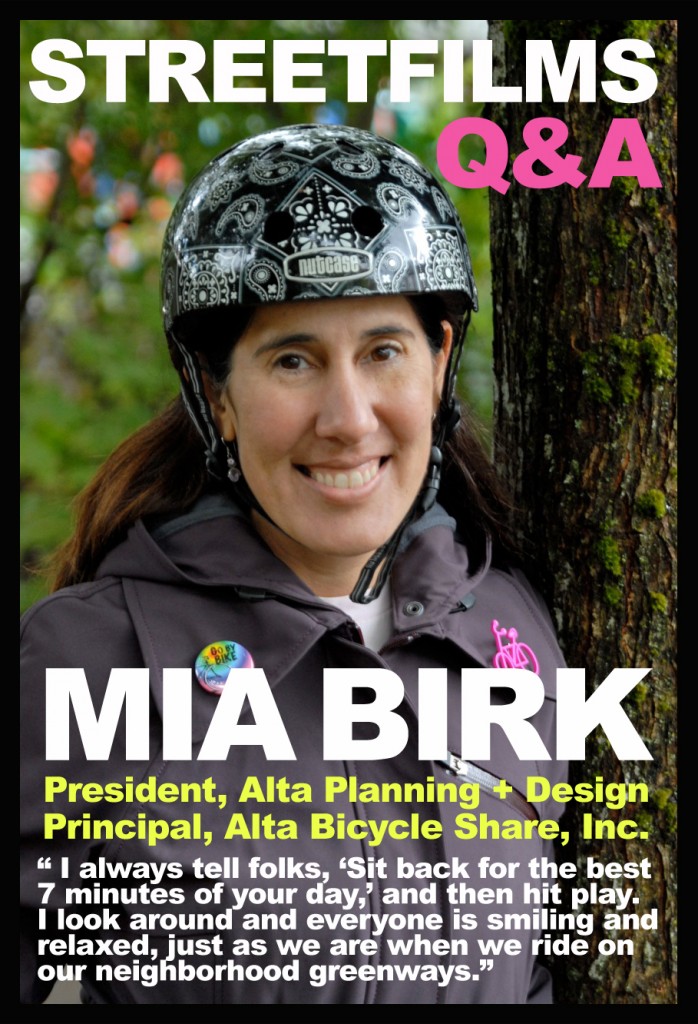 Streetfilms:  As you have traveled the country for Alta and been a part of so much positive change for bicycling, have you seen Streetfilms' influence?

Mia Birk:  In the past year, I've visited more than 60 cities in 15 states and 3 Canadian Provinces, giving speeches and conducting trainings. At practically every one of my presentations I show a Streetfilm video. My favorite is Portland's Bike Boulevards Become Neighborhood Greenways. This is because I've learned that it's really hard for folks to understand what a bike boulevard/neighborhood greenway is. It's not a bike lane or a trail, so folks simply cannot envision what the heck I'm talking about. I show slides and explain, but they still don't really get it. Best, of course, is getting people out on bike on an actual bike boulevard, but 2nd best is that video. It's brilliant.

The video is so much more than just an explanation of a type of facility. It shows how far we’ve come. Back in the 1990s, the [Portland] school district fought so hard against bike parking and promoting. Now, they’re on our side, recognizing that healthy kids learn better. The Bureau of Environmental Services was at odds with transportation for decades; now they are working in partnership to use street right-of-way for higher purposes than just moving and storing private motor vehicles. The Parks Bureau didn’t see their mission as having anything to do with transportation; now they too are in collaboration with the active transportation movement. This makes me so happy.

I always tell folks, "Sit back for the best 7 minutes of your day,” and then hit play. I look around… everyone is smiling and relaxed, just as we are when we ride on our neighborhood greenways. And then, they are sold! It’s gets them over the hump and they are so excited and ready to rock and roll.

SF:   What films in particular have you enjoyed or used?

MB: Portland’s Sunday Parkways and NYC’s Summer Streets. Again, they open people’s eyes, help them understand how different these car-free events are from the typical charity bike ride frequented by the lycra crowd. People see not “cyclists”, they see 10 or 20,000 people moving, smiling, engaging, laughing, and connecting to their public right-of-way, their community, their humanity. It’s beautiful.

SF:  What do you see as the next big issue in cycling and where Streetfilms might make a difference?

MB: I’m quite partial to the Minneapolis Bike Share video, but I think that bike share is definitely ripe for more video documentation. We need more on the health benefits – before and after footage of folks getting healthier and fitter, particularly children. Also more on the economic benefits: jobs, jobs, jobs.