As I usually try to do, here's a quick wrap-up of highlights from my adventures in New Orleans from mid-December to work with TransitCenter and Ride New Orleans. The above Streetfilm was quickly pieced together as I wasn't there to focus on bicycling. But thanks to using New Orleans' Blue Bikes bike share to get around to many shoots (its debut week!) and being around the Bike Easy staff (who shares an office with Ride) I was able to gather a few interviews and footage. Let me stress this one fact: New Orleans has a lot of cyclists. An incredible diversity in age, race, sex and type of bike ridden. I don't think my footage here does it any justice. Cyclists are a constant presence on the streets, but unlike many big cities, you won't see commuting peletons or large groupings waiting for lights. They are just there. Every intersection you'll see them.

But as I said the mission was to showcase the hard work of Ride New Orleans who is scoring victories for its riding public and providing momentum in a city that desperately needs even the bare essentials for its bus riding public. Simple things many might take for granted like signage, route schedules, benches and shelters. The above excerpt with Matthew Henrickson, the Policy Director for Ride, wasn't planned. We were waiting to interview another subject and he sarcastically pointed out we were standing under a bus stop. Knowing there are uncountable similar conditions throughout the city, I just told him to start talking. We got one fast take in right before our interviewee showed up. But this shows the hard choices facing their incoming mayor, which was buoyed by this late December news where the RTA approved a long-range, comprehensive plan to improve NOLA transit.

And speaking of interviews, one of the lovely people you will meet is Ms. Sonja (below with me, and by the way that's HER bike bag) who is on the Transit Riders’ Advisory Committee that meets first Saturday of the month. They're a wonderful, smart group of people who know they pushing the conversation to drastically change their city. Ms. Sonja gathered 600 signatures to get a bench and bus shelter installed at her senior living home, which she is very proud of. And now she is helping other volunteers and motivating people do the same. 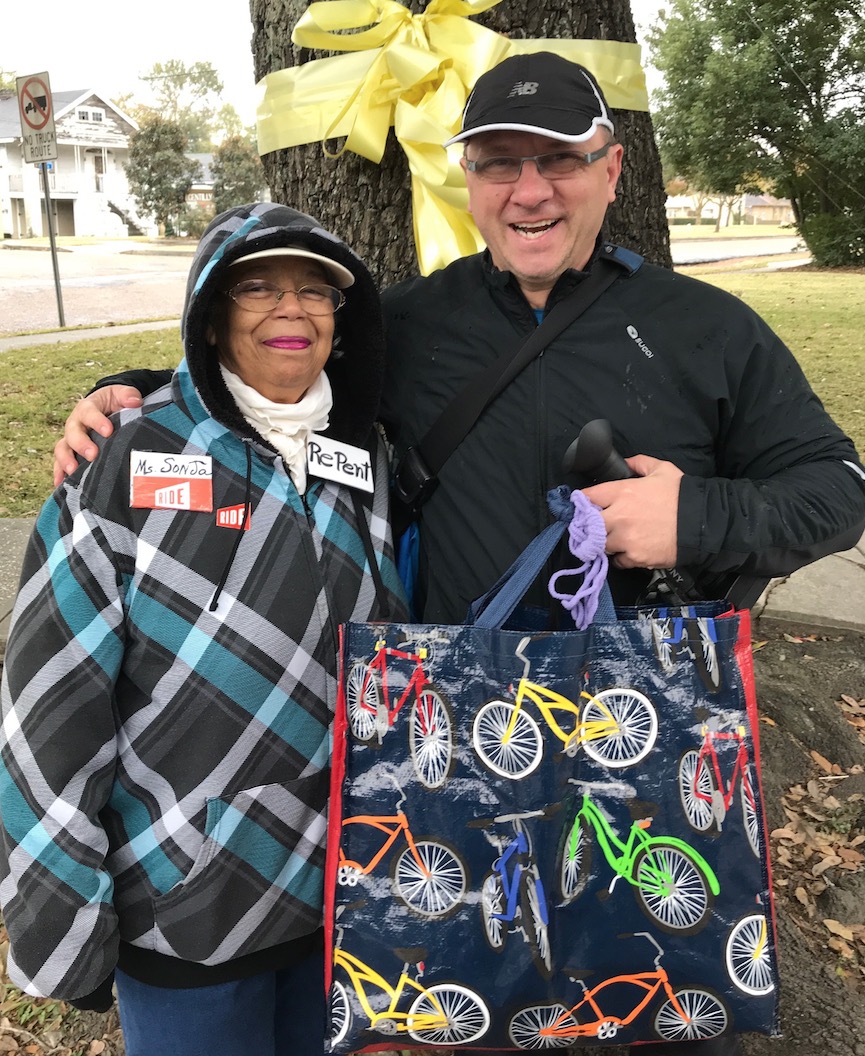 I really get to meet so many nice people in my travels. She's certainly one of them.  You'll get to meet her and up to a dozen others (hopefully) by the end of the month or early February.

And finally, if you watched the Streetfilm at the top of the page, you'll see I became a bit obsessed bike riding in the "neutral ground", which is the term for medians (grassy, concrete, whatever) in NOLA. I did some research on it and the history of the evolution of the term is quite cool. Click to read here. Then watch my extended outtake riding on the neutral ground and many of the other people riding bikes enjoy there.