Today I fly back to NYC after nearly a week in Dallas and Houston. For a guy from the Northeast I have been both pleasantly surprised by nice things I've seen and also intimidated by the numbers of cars - big cars - everywhere I go.  Here are just a few Streetfilms shorties to give you a small taste of what I have seen. The above video is from Dallas where Klyde Warren Park a newly opened public space has attracted a lot of visitors. The park was built over the top of a freeway. But it cost quite a bit of money to do so - $110 million dollars! It has a lot of great programming and the food trucks make it a constant draw.

Over in Houston, I fell in love with the Metro Rail's Main Street Square stop. As you can see in the video montage, the train passes thru an amazing car-free block filled with fountains and dazzling lights. I've never seen anything quite like it anywhere. I only posted nighttime footage as the transit nerd in me wanted you to feel as I did soaking it in just sitting there one night. 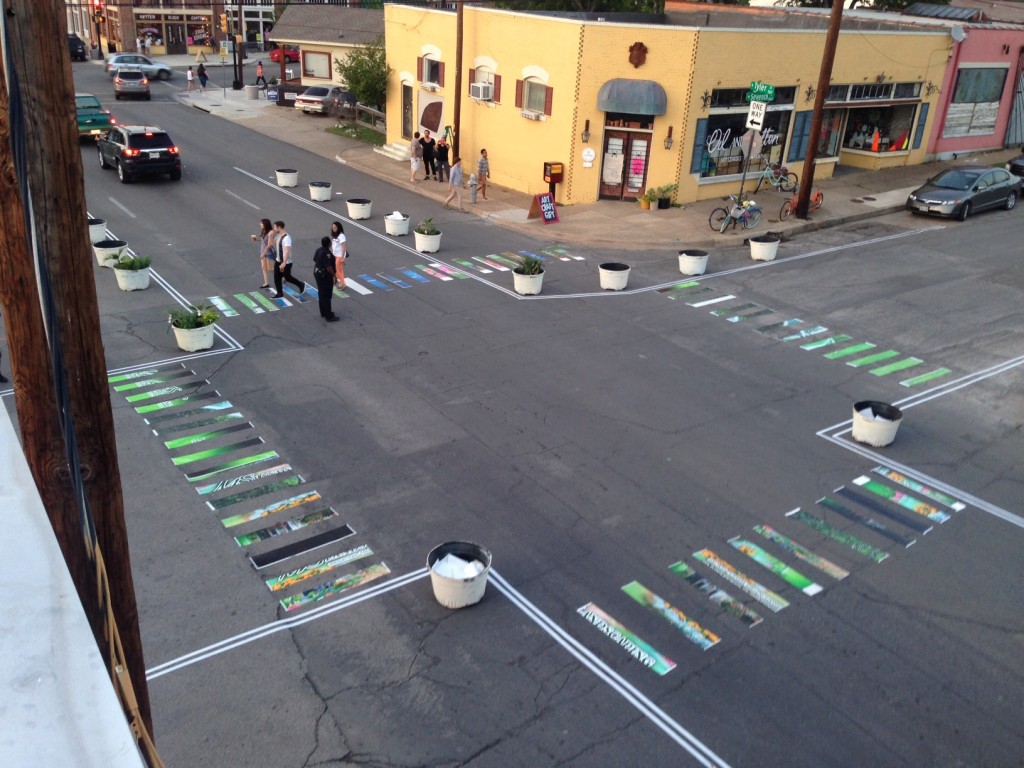 Back to Dallas, the main reason I went there was to do a profile on The Better Block's Jason Roberts, who has gained worldwide fame for what he's done in Oak Cliff with his Better Block initiatives. I was in town to document the 4 year celebration and as a teaser to that piece, check out the above photo of one of the innovative wrinkles they put in the mix this time around: re-purposed, sliced up billboard wraps as temporary crosswalks! Radical!  I tweeted the above photo from the event which was joyusly re-posted umpteenth times on Twitter. I'll be working on getting a big deal of this Streetfilm completed by this weekend.

Finally, there are quite a few challenges to riding a bike in Dallas. A few painted lanes and sharrows on the roads, that's about it. Not much to encourage more than the brave. But there are some very nice biking trails. I got to ride a few miles on three of them: the Katy Trail, the Santa Fe Trail, and the White Rock Lake trail.