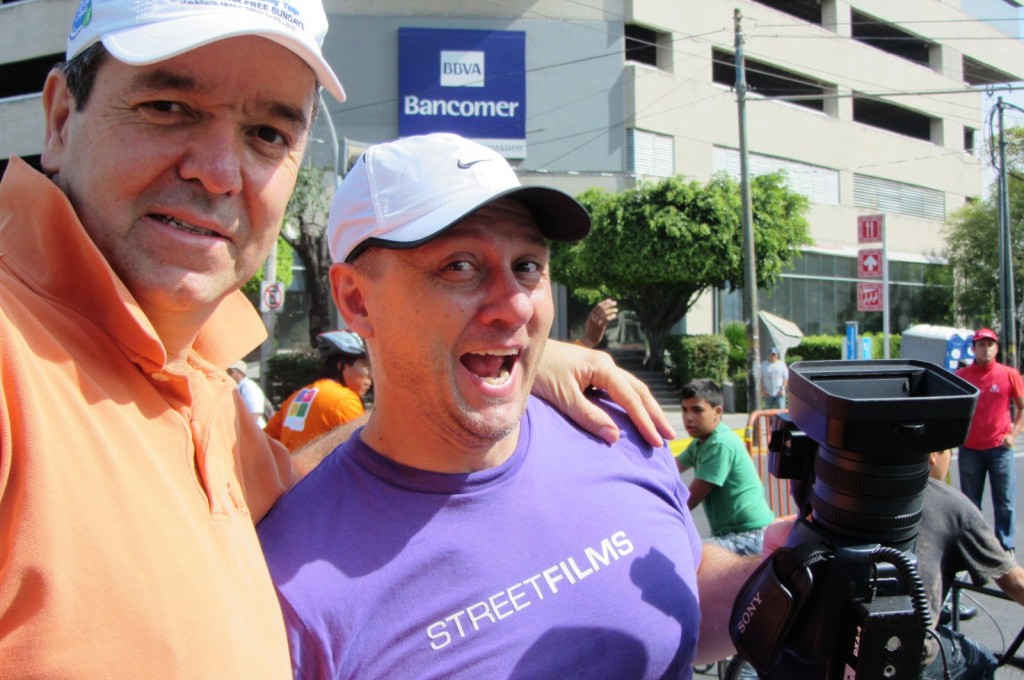 Despite being saddled with a bad back & hip issues, I was thrilled to be able to visit Guadalajara, Mexico last week. Thanks to the kindness of my hosts, Guadalajara 2020, I was able to see much of the city and meet many advocates, students and business people who are all interested in seeing a city much more friendly to alternative transportation.

I wanted to share some of my observations, video and photos of my trip.

Upon landing I was picked up and driven 30 minutes to my hotel. Along the way, it was easy to see that Guadalajara is indeed facing a sustainability crisis like many cities and communities in the U.S., but you can multiply that three or fourfold.  Traffic is a nightmare at all times. Most streets are extremely unfriendly to pedestrians. There already is a crisis of epic proportions.

As usual, the first thing I did after checking in was to walk a half dozen blocks in a few directions to see what is around.  I brought my camera and in just a few minutes I taped this:

This scene is typical.  The absence of crosswalks and lack of sidewalks (or insufficient ones) is common. Drivers go wherever they want. Park wherever they want. Make dangerous decisions to bicyclists, pedestrians and other drivers. It's as if planning was an afterthought for anything but the automobile.  As Gil Penalosa advised me at the hotel, "When walking, even when you have the right-of-way, assume you do not."  That advice may have saved my life at least twice.

And yet the energy of the city is amazing, as are the people. The first night we were driven to the monthly, first-Thursday-night bike ride the Paseo de Todos which the organization GDL en Bici hosts. (Due to my body limitations and hotel location I was in a car far more than I am used to.)  The ride is essentially a critical mass featuring thousands of bike riders. Here's a small tease of footage from a future Streetfilm:

The next day I spent a great deal of time experiencing the wonderful Centro Guadalajara, a huge network of car-free streets downtown that were as welcoming as the other streets are unfriendly. It surprised me. I got to see a few other car-free districts as well, during the day and night. Always busy, lots of commerce going on, restaurants filled, and no vacancies to be seen anywhere. These were among the most beautiful pedestrian-only streets I have seen in all my travels. Right up there with Copenhagen.

Here is a montage of footage you will certainly salivate over:

On Saturday the surprises just continued. After eating desayuno I grabbed a paper on the way back to my room and there I was on the front page! You see, the day before I was interviewed by Guadalajara's largest newspaper, El Informador, about my professional work and how I had come to the city to document their Sunday RecreActiva and to speak to students at Tec de Monterrey.  I guess it really is true - the further you go away from home, the more famous you become! Here's my mug below, the full article is available here, if si hablas español. 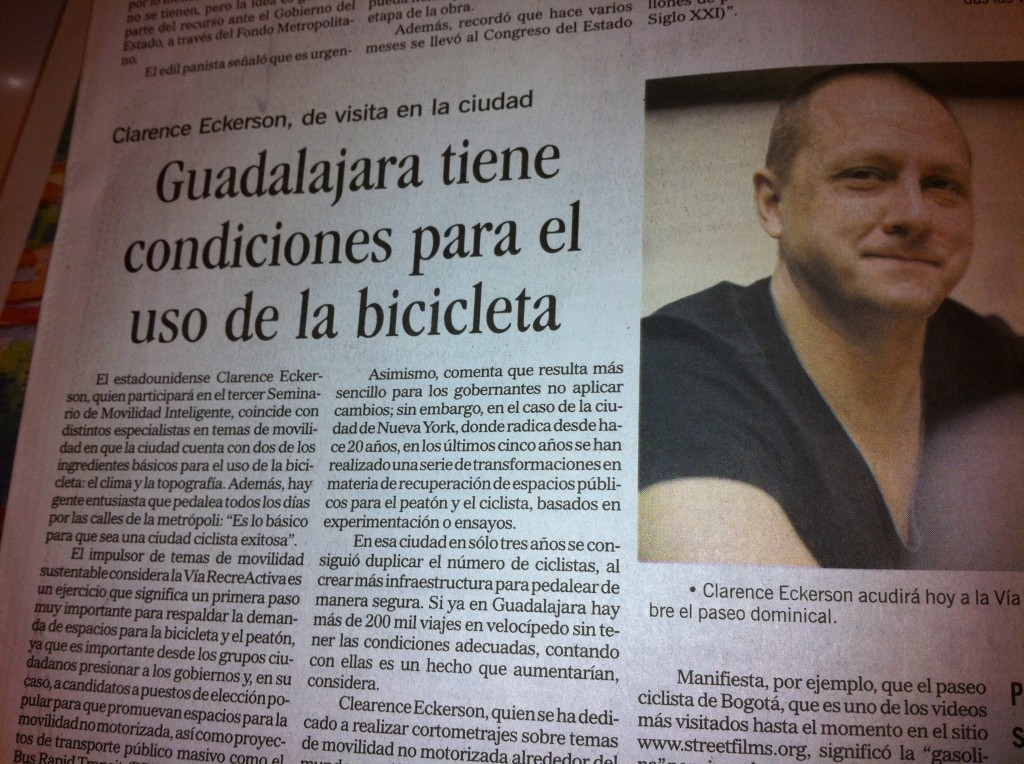 I made a faux pas by not wearing our traditional purple Streetfilms t-shirt, but if you click on the link to El Informador (above) it features me muy guapo!

Soon it was Sunday morning and our main event: Guadalajara's RecreActiva.  As with many ciclovia-style events throughout the world, every Sunday the city opens 64 kms of streets to exclusive use of pedestrians, bicycles, rollerskaters and walkers.  I'll be honest, I have participated in many events throughout the world and Guadalajara's just might be the best! We didn't even ride very many miles and the numbers of people I saw in wheelchairs recreating just floored me. Dog walking was very popular.  The newest wrinkle?  An entire tent set up for children to get free haircuts! Estupdeno! as I am now fond of saying.

Of course there is a Streetfilm coming in a few weeks, but to tide you over here is just a small tease of the amazing hula-hooping we saw at one activity stop:

I was also incredibly lucky that Gil took some photos of me in action. We have so few of us actually doing our job. I happily share a few here and end my write up.  But there's so much more to talk about.  Stay tuned and check back for the Streetfilms that will debut over the next few weeks. Can't miss 'em! 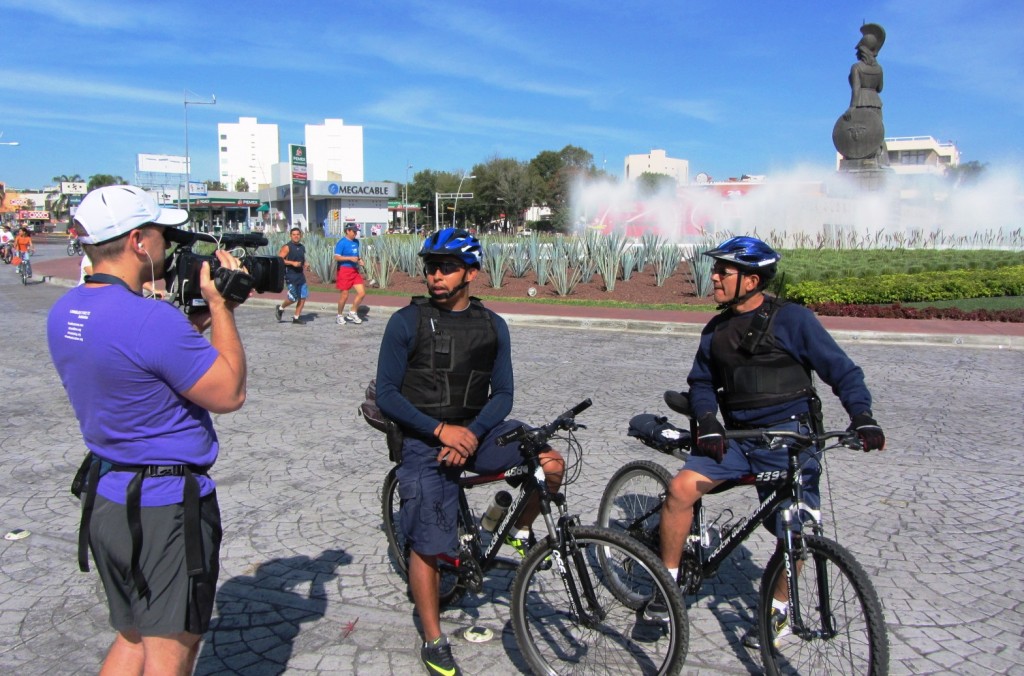 Interviewing police officers at the Statue of Minerva, one of the more recognizable spots in Guadalajara! 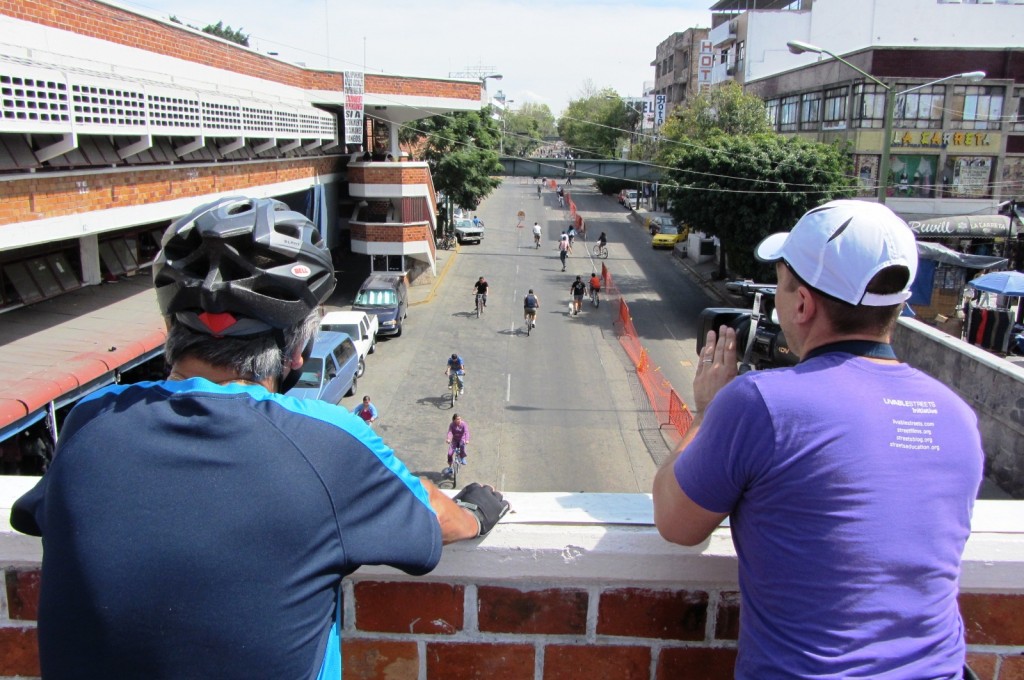 Taking advantage: Finding a spot to videotape the RecreActiva from above, which is always a good vantage spot to shoot a Streetfilm. 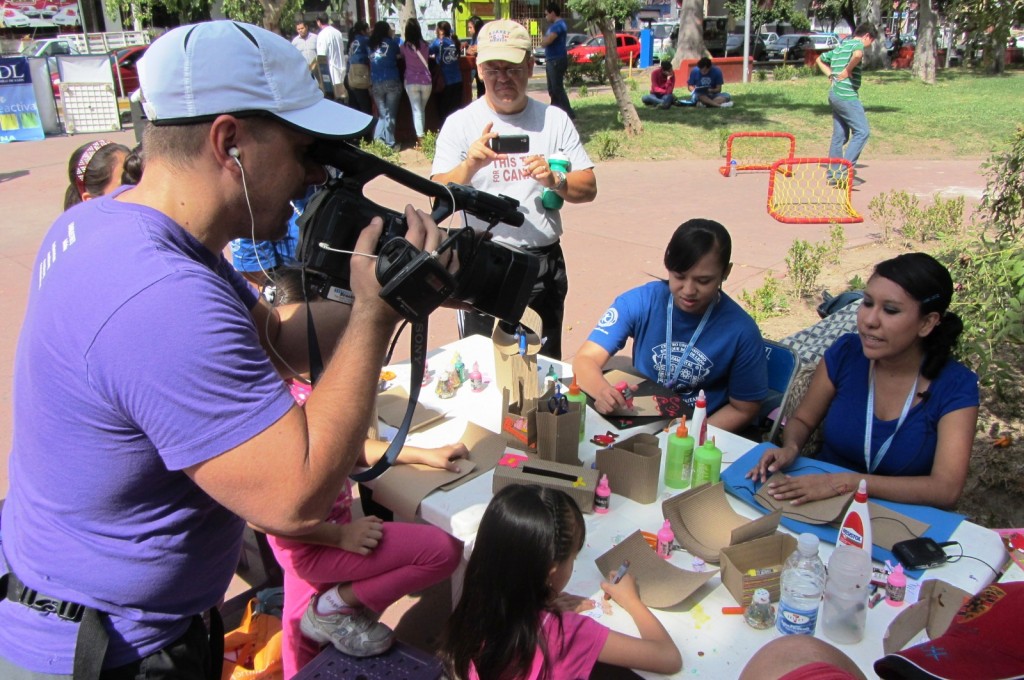 Some of the volunteers talk about the activities for smaller children.