Every year the Institute for Transportation & Development Policy (ITDP) picks one or two cities deserving of the Sustainable Transport Award. San Francisco and Medellín, Colombia, are this year’s winners.

Streetfilms worked with ITDP to document these two cities and we'll be releasing videos on each this spring. But since I just returned from Medellín, I can't help but share a few highlights.

I met Carlos Moreno from despacio.org at the airport. Carlos translated and helped coordinate the logistics of this video shoot. We started with a 45-minute cab ride down the mountain to the valley where Medellín is situated. The view as we descended was absolutely spectacular and set the tone for our week's work. 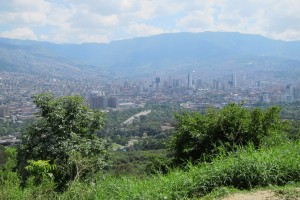 Once in Medellín, we met Jorge Iván Ballesteros and Jesús Acero. These two gentlemen were going to show us why their city was nominated for ITDP's prestigious award. And we were to dedicate each day to a different theme, starting with "public space" on the first day. 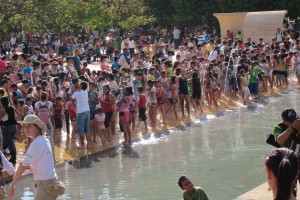 We set aside time to ride the new bus rapid transit lines called MetroPlús, which are integrated with Metro (subway) and MetroCable (cable tram) lines. 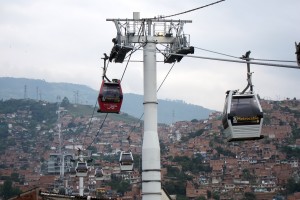 There are multiple lines in the MetroCable system, including one that is now accessible for those living in the steep mountainside neighborhood called Comuna 13.  For the residents of this community it used to take 45 minutes to climb the mountain by foot to get to the MetroCable line. With newly installed public escalators, it will take under 10 minutes.

Here's a very brief look at children learning to use this newly installed escalator system:

And of course we rode bikes. We biked in Ciclovia: 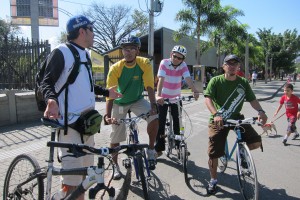 We rode in the Wednesday night community-building ride. Here's some footage from this Critical Mass-style ride:

And we rode EnCicla, the new bike-share program. This bike-share system is small, with 145 bikes, but the model is rather unique with public bikes used mainly in the university part of the city but also up in the rural area in Park Arvi. Here we are riding EnCicla on a bikeway to our next interview: 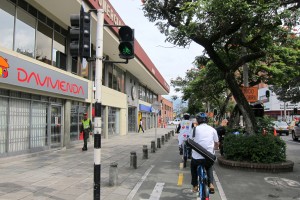 From what I saw and heard, Medellín is serious about becoming a leader in developing an integrated transportation system to facilitate better health and education for all residents of the city.