The Complete Origin of the #Sneckdown 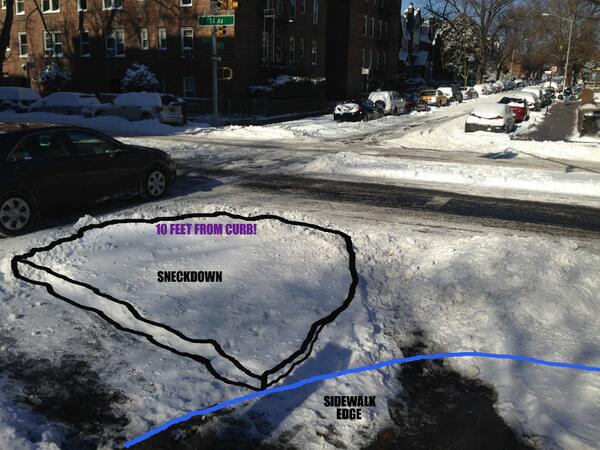 Nearly everywhere in the livable streets world you look, the sneckdown phenomenon is growing - with hundreds of photos tagged #sneckdown on Twitter in the last month.

Although the majority of  news articles & blogging sites have done a commendable job spreading the word, there's still a bit of confusion about the origin of the term and how it all started up.  So let's clear that up.

About me: I've been shooting video since the late 1990s, always looking for interesting ways to explain transportation concepts to people. At first it was a hobby. In 2003, it morphed in to a full time job. During that time I learned much from volunteering with Transportation Alternatives and at some point I most certainly read this article in their monthly magazine which spoke about snow calming on curb corners.

(And if we want to delve back further, I've been told by friends that they had professors in urban planning courses talking about observing the patterns of footprints and vehicles in the snow, some as early as the mid-1990s. Dan Burden adds this wonderful bit of history. And somewhere l feel like Jane Jacobs must have pondered this too.)

I lived in Carroll Gardens, Brooklyn. I was frustrated with our Community Board always being resistant to the concept of traffic calming. They'd come up with ridiculous reasons against sensible implementations.  Then one day in 2006 we had one of the largest NYC snowstorms ever and I decided to go walk around and record this: Street Lessons from a Blizzard.

I got a lot of positive feedback on that short. But in the back of my mind, I wanted to do a more serious Streetfilm, one that focussed on slowing down traffic in crosswalks and making the case for putting in curb extensions, or as some wonky traffic experts referred to as "neckdowns".  In 2011, now living in Queens, I shot a sequel finding that some of these collections of snow - which I have referred to as "nature's tracing paper " - are nearly 10 feet out from the curb!  At one point I improvised the term "snowy neckdowns" when describing them, which was used in the title of this Streetfilm.

Both videos were moderate hits, attracting periodic attention from fans & advocates - some emailing me or tweeting the occasional photo(s). During this time Doug Gordon, from Brooklyn Spoke, was a regular contributor trying to rally folks to do the same. 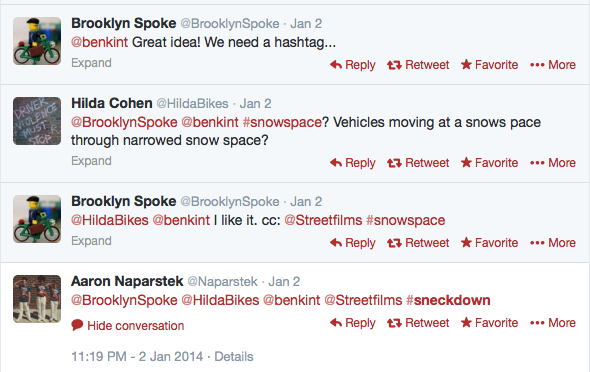 Then suddenly, interest in the videos climbed in December, most likely due to the copious winter snowstorms rolling across the U.S. One day before an impending storm was due to hit the northeast, Doug Gordon suggested we needed a hashtag for encouraging posting of a new batch of photos. As you can see from the above Twitter screenshot, Aaron Naparstek, Streetsblog founder and former Editor-in-Chief suggested #sneckdown, a portmanteau of "snowy neckdowns".

It was perfect. The hashtag got people psyched. And it got even more people curious. "What the heck is a #sneckdown?" was a frequent tweet I'd attempt to answer in 140 characters. Then the news stories started. The first big one was by the BBC.  That was followed by many more media reports and a few radio interviews.

But the best part of all was watching people really run with the #sneckdown concept.  Folks started adding their own lines and graphics in photoshop indicating where curb extensions would go, like this (above) from Nels Nelson in Cambridge. There was this blog post with copious photos from Darren Proulx. in Alberta, Canada who got motivated by us to capture his streets. 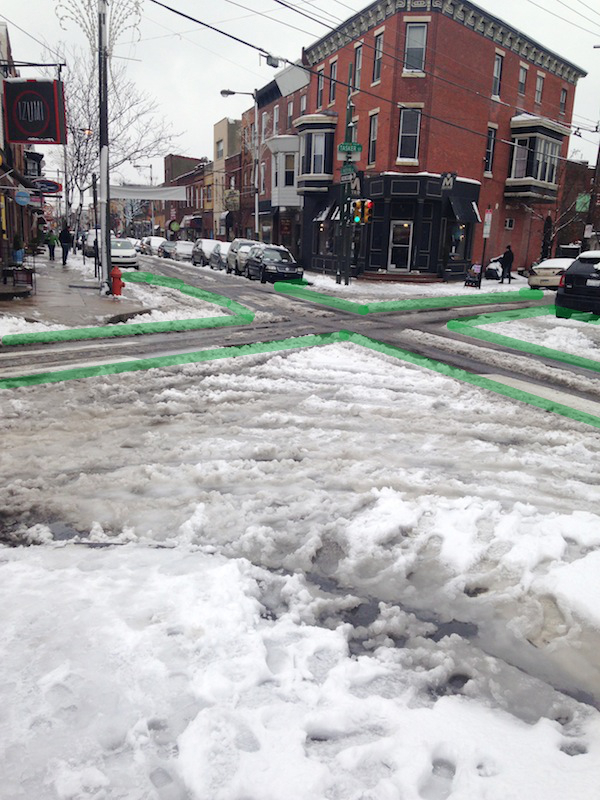 But perhaps the most amazing came just a few days ago from Jon Geeting in Philadelphia blogging on "This Old City" who produced the above epic showing dozens of places in his neighborhood where streetspace could be converted to make streets safer. Also complete with drawn in "new curbs". I now consider this a template for advocates across the country to follow.

In closing, I'd like to point out - again - that I did not invent this useful observation about snow, though I am likely the first to make films about it. I felt it prudent to have the history of the term "sneckdown" documented here for the curious. I am also not a traffic engineer and have no formal training in urban planning. Certainly taking a photo of a sneckdown does not equate to an absolute mathematical seizure of asphalt to implement traffic calming.

But it does show where there is a strong, inspiring possibility for change. Admittedly, there are many factors to take into account: street geometry, car speeds, width of street, emergency vehicles, bikes, density of pedestrians, etc etc. Yet I'd be willing to bet in the places where I have measured 10 feet of sneckdown, certainly at least 4, 5 or 6 of those feet could be better reconfigured for pedestrian safety.

So go and be inspired. Document your streets.  While it is still snowing.