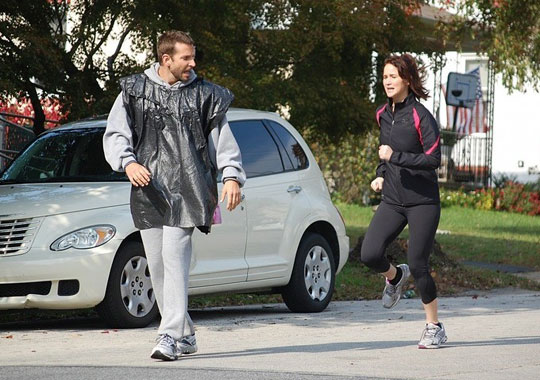 I finally got around to seeing the Oscar-nominated "Silver Linings Playbook," and it's a charming film. It certainly deserves to be right up there with the top pictures of 2012. And as the film unspooled, I got a pleasant surprise: Neither of the main characters owns (or drives) a car.

Except for the opening scenes where Pat (Bradley Cooper) is driven home to a Philadelphia suburb after eight months in a mental health facility, Pat and Tiffany (Jennifer Lawrence) spend nearly the entire movie getting to know each other while on foot. Whether it's on a date, walking home from a friend's dinner party, going out for a run, walking to eat cereal at the local diner, or just arguing in the street, this film shows them moving as pedestrians and it's very refreshing. You really sense that the characters need to be in this alfresco mode, and that talking while walking is therapeutic and healthy.

Of course, one could argue their carlessness plays up their mental health problems and that they are not fully integrated with "normal" society. So do the filmmakers want us to think that since both of them are going thru emotionally tough times, they're not stable enough to drive? Possibly.

But it also just might be that their constitutionals and interactions give these characters more depth and let us get closer to them. Unburdened by the automobile, they have time to sort things out, to communicate, and to let their minds breathe.

In the end, the director knows these intentions the best, and when I realized the director/writer was David O. Russell, who grew up in New York City, it started to make some sense. In 2004, he directed the amazing "I Heart Huckabees," an off-beat tale about existentialism and quirky characters in search of themselves. It's one of my all-time favorite comedies.

"Huckabees" contains many scenes of characters using bicycles for transport and has an environmental message at its heart.  Quite possibly its funniest moment is when firefighter Mark Wahlberg rides his bicycle on an emergency call and beats the firetruck to the scene after it gets caught in a traffic jam.

Once again, the bicycles in "Huckabees" may be meant to emphasize these characters' eccentricities. Does this make the audience more prone to laugh at them?  Or does it make the characters seem more inspired, intrepid, and smart?  In the end, the answer is probably both and there's really nothing wrong with that.

Thoughts and other movies?  Leave them below.