The #Sneckdown at the end of my Street 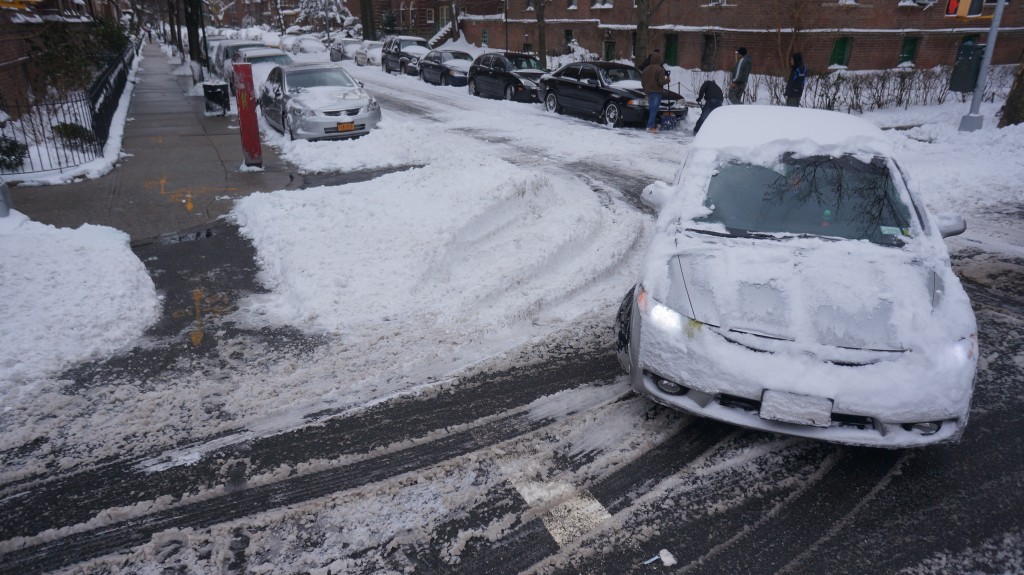 On Tuesday, Streetsblog did a post of photos of the latest round of #sneckdown madness sweeping the nation. I posted one (above) of a sneckdown at end of my street in Jackson Heights, Queens, the corner of 34th Avenue & 85th Street. It was pretty typical of what intersections looked like that morning following the pseudo-Blizzard in my nabe. 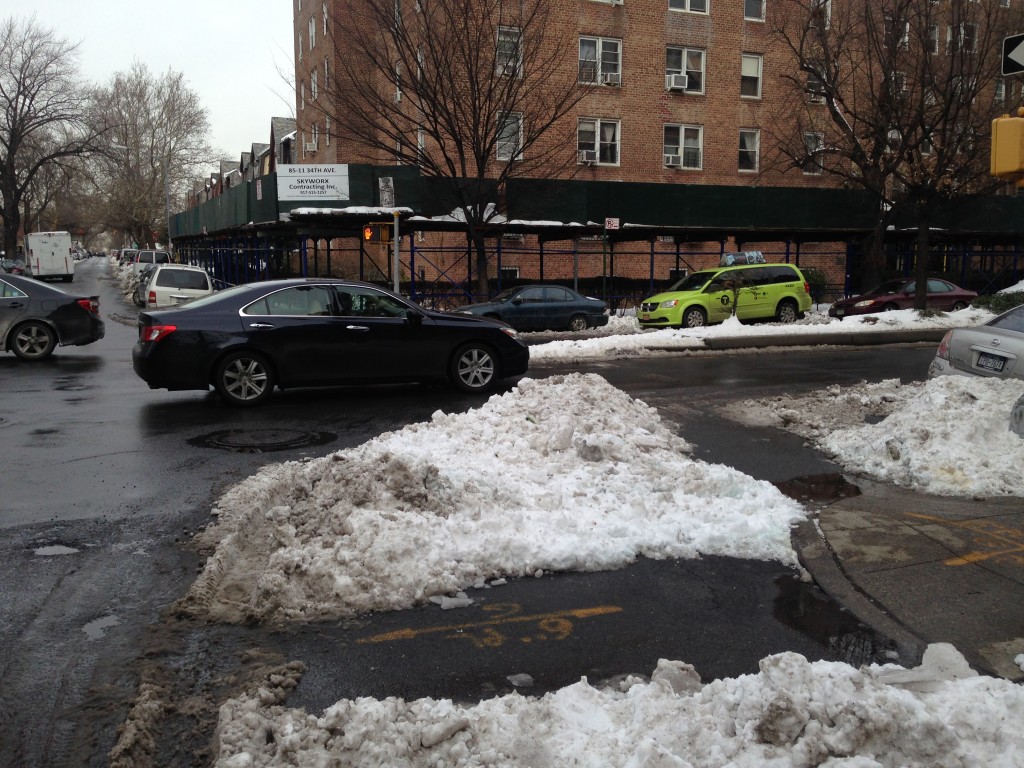 A much dirtier sneckdown two and half days later, but functioning exactly the same.

It's now over 52 hours since the snow stopped falling so I went back and snapped some updates. Comparing the Tuesday and today photos there's really not much difference (except it's dirtier and wetter). We still have the SE corner (the turning corner) with essentially a ten foot snow extension from the curb. The closest tire track thru the snow is approximately 8 feet from the curb. 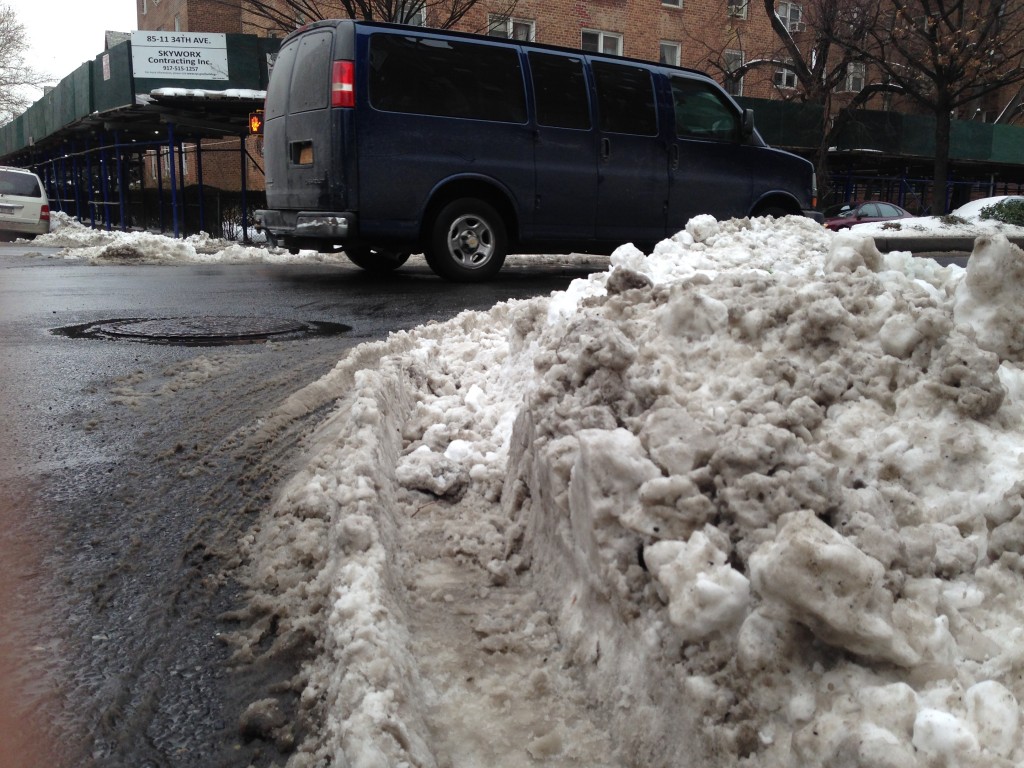 This tire track is the closest groove thru the snow. It is still 8 feet from the curb.

Some critics of the sneckdown phenomenon cite that it fails to take in to account larger vehicle turns. This is why it is important to use a little moxie in your documentation. If the sneckdown hangs around days after the initial snowfall, you'll have more anecdotal evidence the street is overbuilt. NYC has been largely back to normal for the better part of two days. There are still large piles of ice & snow calming traffic.  The pace of cars is a bit slower. Good news for everyone except those who might want to drive more dangerously. 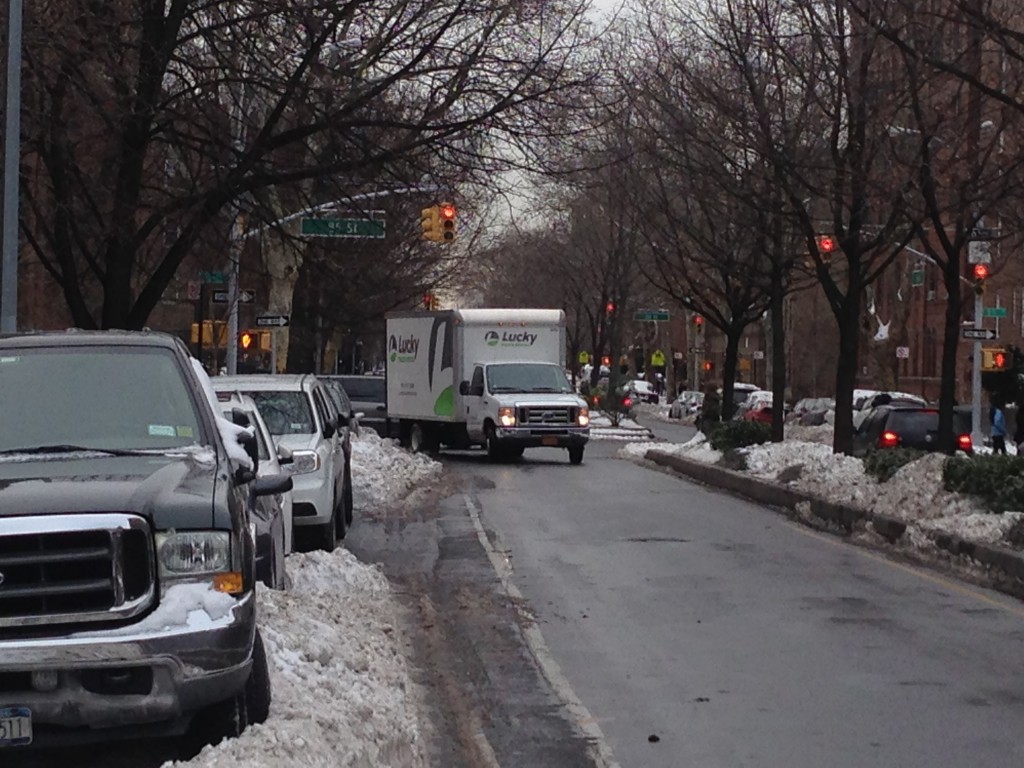 A truck makes the turn from 85th Street onto 34th Avenue as easily it would on a clear day.

I've observed all kinds of vehicles easily make the turn on my block (which by the way could be considered more challenging since there's a median on 34th Avenue that makes the turn sharper - see photo.) I've seen SUVs, vans, long furniture delivery trucks, postal trucks and even a mini bus make the turn. Not a problem.  (I admit I have not seen a firetruck to those who will naysay.)

Okay, yes, the sneckdown is not an absolute 1:1 ratio. But it's a conversation starter. It shows evidence where streets are seriously overbuilt and where modifications could help pedestrians. Of course I wouldn't advocate for 10 foot curb extensions on this block. Or even 8. But 5 or 6 feet is certainly a reality.

Finally, check out below the progression of what traffic calming does and the sneckdown simulates in this triptych.  This parent starts crossing 34th Avenue with her child as the car waits patiently on 85th since they cannot make that turn so sharply. Then the car makes its turn. We can do this in so many places if we have the will and funds. 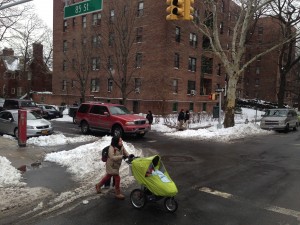 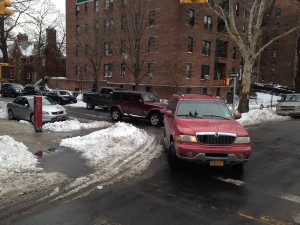 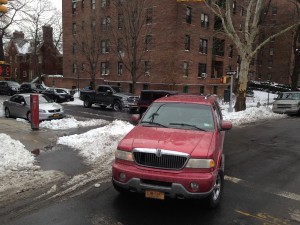 Driver heads towards the light on 86th Street, which in all likelihood probably will be red anyway - so there is no rush to make the turn in the first place.

So get out there and document. And if you want more info on how to do it and inspire others, go to ioby right now where Streetfilms & Sneckdowns are featured in their 5 x 5 Getting Good Done in the Cold & Snow. Download the PDF for more #sneckdown tips. And keep posting on Twitter!