I was very fortunate to be able to take a long vacation to South America and was in the cities of Buenos Aires, Montevideo and Asuncion. Of course with me a vacation can never be truly 100% relaxing when there is transportation observations to be made and I was able to squeeze in some Streetfilms work here and there.  Here are some short videos and photos with commentary.

The first video above (apologies for some sound, it was a very impromptu shoot without using all my gear) is from Montevideo, Uruguay. I was very surprised to see so much bicycling and very new bike infrastructure. And also: bike share! My wife and I had a few hours to rent bikes and were able to meet up with Matias Kalwill, creator of the app Bikestorming which aims to increase urban bicycling, who took us for a very quick city loop. I thought viewers would be happy to experience biking in another country, even if not given the usual Streetfilms treatment.

Public Space Takeover! While in Buenos Aires (an official Streetfilm on their MetroBus and other transportation accomplishments coming soon) we were fortunate to capture residents flooding the Avenida 9 de Julio (widest Avenue in the world) to celebrate Argentina advancing to the World Cup final. How exciting it was to be in the middle of it as it all occurred. Instant public space by the people!

Speaking of Avenida 9 de Julio (which is where Buenos Aires' MetroBus BRT runs) coincidentally we happened to be there on July 9th which is a national holiday. They had many car-free celebrations and festivals. They had some vintage buses to check out. I grabbed the above footage for all you bus nerds out there. 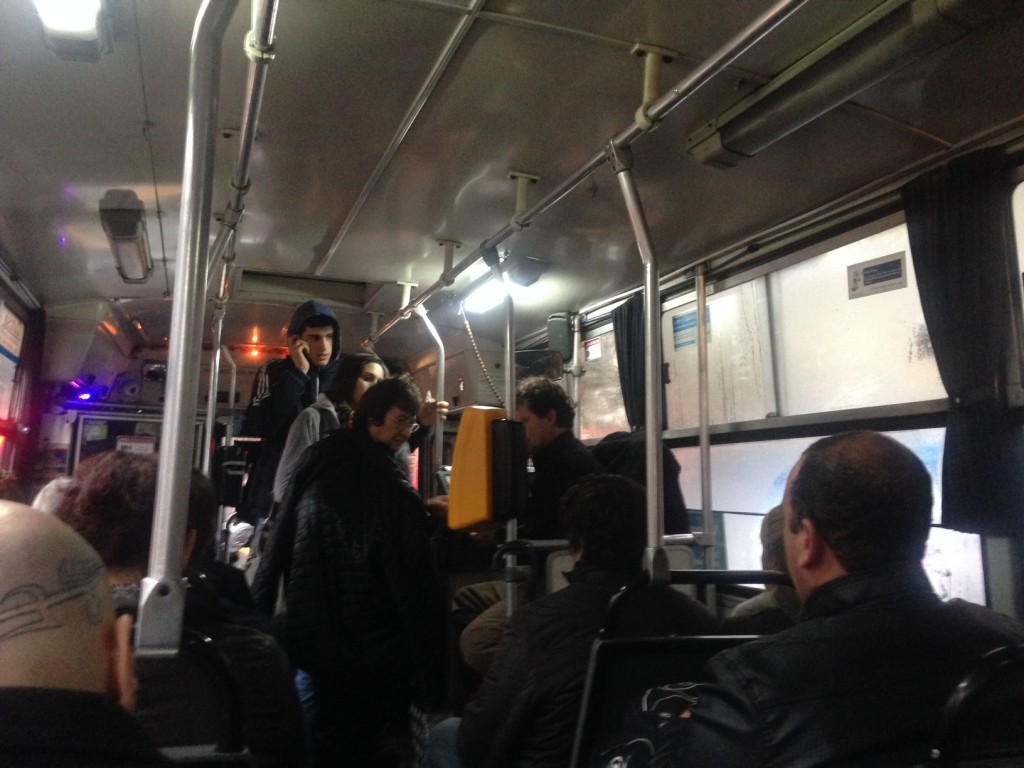 Staying on the topic of buses, we rode quite a few in Montevideo. Fares were very cheap (just under $1 US) and fare collection was even more interesting. Check out this snapshot: many buses have a driver AND a fare collector, and that person is positioned inside the bus so about four or five people can get on the bus. The driver can pull away on to the next stop. It keeps things very efficient and fast. I was surprised at the speeds of Montevideo buses.

Finally, let's end with some fun. While walking around Buenos Aires, I tweeted a photo of this sign jokingly asking our followers what it was. 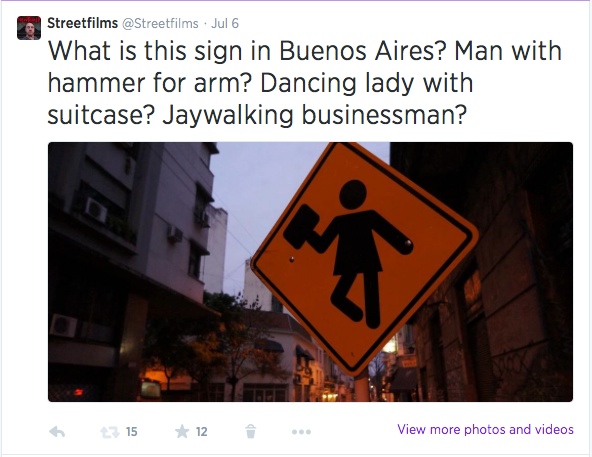 We got some fun suggestions. Doug Rogers said it was "Lady Thor". Peter Koonce replied "soccer fan with beer stein".  Sam Ollinger tweeted back "skipping with briefcase permitted here".  But of course the real answer is that there is a school nearby and to watch for children.

(Note: Earlier I posted some photos of a ped/bike area median from Asuncion, Paraguay that once was a tram/rail line.  Now with a very interesting update.)