The 1968 "Playstreets" video above just blows my mind - and probably will yours if you love open streets and ciclovias. I had no idea PAL (the Police Athletic League) was closing down streets/blocks in New York City for kids for so long. In fact since 1914, over one hundred years ago!

I found it while looking thru the Prelinger Archives which has made over 6600 vintage mini-documentaries, news reels and random works free to use by the public. There's so much history to peruse. I re-edited the "Playstreets" to under 3 minutes and added a bit of Streetfilms-style music to make it more swift & modern.

But really, some of the archives can be sad and stark. For example, check out this victim blaming 10 minute short produced to air in schools titled "The ABC's of Walking Wisely (1959), an attempt to cleverly "educate" children by using the letters of the alphabet to demonize walking behaviors. Never once in the film does the female narrator talk about the responsibility of drivers, instead choosing to call school kids insulting names while championing, "Don't be a J-Walker, be an A-Walker". I trimmed this down to several cringeworthy moments you'll be aghast by including the narrator saying, "show consideration for the drivers - and be safe yourself." I'll add: there are several moments where it looks like the producers dangerously put the children in potential harm filming around cars. Oh yeah, definitely watch.

There are dozens of transportation films I found in Prelinger sponsored by (who else?) car companies pushing the idea of how wonderful the modern conveniences of the car are.  Some are somewhat harmless like fun family car vacations but others push highway building, parking and the oil industry showing how the propaganda-filled 1950s set in motion some awful transportation policies.

And we are still recovering from the auto's invasion of our cities. "Give Yourself the Green Light" (1954) is a half hour bonanza chock-filled with moments that will make you groan, and likely, get depressed.  I selected about 4 minutes filled with items I found particularly egregious. You'll see: a frustrated Miss America searching in vain for parking, a narrator saying "the best investment a town can make is parking" plus some vintage highway footage on the Gowanus Expressway and BQE Brooklyn Heights where the script unbelievably notes that these are structures which solved transportation problems "without disturbing life below." (Yeah anyone seen Sunset Park under the elevated highway?)

You'll find full-length copies of "Give Yourself the Green Light"on Youtube if your interest is piqued and you want to consume the full film. But I fully encourage you to browse and use the Prelinger Archives. I watched 100s of them this past week. So much fun. 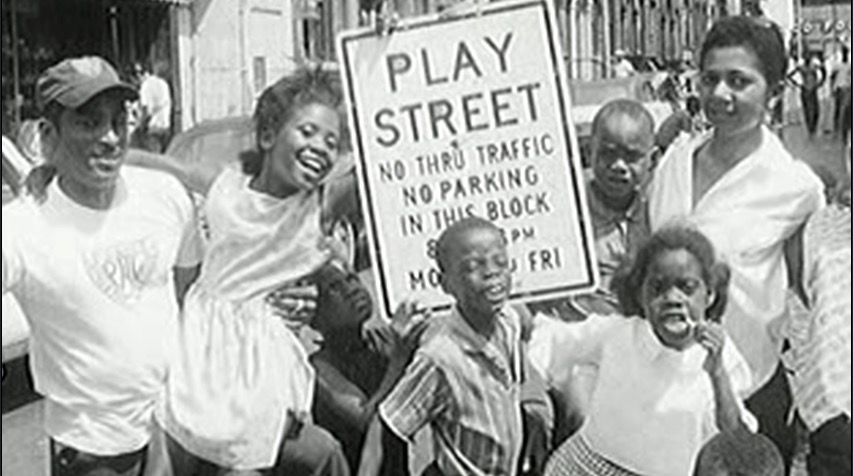