“Wolfen” (1981): A Cool Look Back at NYC Transportation Infrastructure

The above apocalyptic-looking still is one of many shots of the South Bronx (circa 1980) from the opening montage to my favorite, New York City-set movie "Wolfen", an often forgotten film (even among horror buffs) about shape-shifters defending their land from greedy fat-cat developers. Though not a 5 star movie, it's a very solid tale with some incredible alfresco scenes providing a reference of just how much NYC has changed in the past 30 years.

Sure there's "The French Connection", "Manhattan", and "The Warriors", but if you love transportation, I'm promising you there's more NYC livable streets nostalgia in this film then any I've seen. Let me take you thru just a few of my favorite scenes.

Very early on a very rich couple are murdered in Battery Park. It's there we meet our protagonist Dewey (right, Albert Finney) a retired detective who is assigned the case. As the police do their work in Battery Park just soak up the scenery of lower Manhattan with the WTC towers and Hudson River making numerous appearances (and yes, that's Gregory Hines, left.)

A few scenes later Finney meets his new partner along the Hudson River for hot dogs and conversation. What makes this scene so incredible? See that elevated highway in the background? That's the former West Side Elevated Highway which partially collapsed in 1973.  It's amazing how little footage of it exists anywhere; it's the only movie I know in which it appears. (Note: "Gridlock Sam" Schwartz speaks much about it in this Streetfilm.)

Now we get into some truly sobering imagery. Sure there are old photos and news stories showing the urban decay of the South Bronx of the 1970s and 80s, but none of it has ever appeared in a pristine 35mm motion picture quite like this.  In "Wolfen" our investigators make multiple visits to the area to look into similar murders that have occurred there.

If you have ever ridden Transportation Alternatives' Tour de Bronx, you'd never know it passes thru some of these areas. Especially this intersection above - which thanks to some careful still-framing & zooming - I believe to be Charlotte Street & East 170th - nowdays a thriving community filled with single family homes. (See an overhead side-by-side comparison at the bottom of this article.) Really, every New Yorker should see this. It's pretty mind-blowing this ever happened to our city. 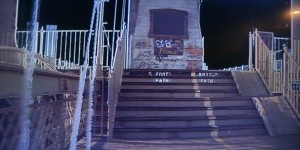 A few scenes later, some of the Wolfen shape-shifters make their way to the Brooklyn Bridge. From their heat-seeking POV we experience their dash over the pedestrian path as they encounter one of the seven sets of tower steps cyclists and pedestrians used to negotiate. Imagine having to walk your bike up and down all those stairs! Good news: soon after the film's release the steps were replaced with the ramps we have today.

In a scene that needs to be seen to believed - since it was somehow shot with a full camera crew atop the windy Manhattan Bridge - an impatient Albert Finney does an uneasy climb to the top to interview some bridge workers who may know something about the murders. Here the lower Manhattan skyline is on beautiful display including the WTC towers.

As he quizzes one of the men (a very young Edward James Olmos) you can see a lot of the Brooklyn waterfront & East River behind them. In this amazing still, on the left  you can see hundreds of cars parked where now the beautiful Brooklyn Bridge Park resides!  I am not aware of any film ever shooting at the top of one NYC bridge and yet this film does it twice (earlier they shoot atop of the Brooklyn Bridge as well.)

I really could go on and on but I think if you're still reading I may have convinced you to rent or watch "Wolfen" on Netflix. There's plenty of Central Park in the movie as well as Riverside Drive, Coney Island, the Central Park Zoo, and this climatic "wolves vs cops" scene above on Wall Street. Sometimes it's hard to recall what some parts of NYC looked like without security fencing, concrete bollards, and twenty-four hour sentries.

And finally as I promised above, here's an overhead view of the area of the South Bronx "Wolfen" was mostly filmed in. I was able to match up close enough visuals of 1980 vs 2012 (that's the elevated 5-subway train two blocks behind the church!) Double-click on it. Pretty cool, huh? And if you do get to watch "Wolfen" you'll see the shapeshifters would have been quite happy with this end result.