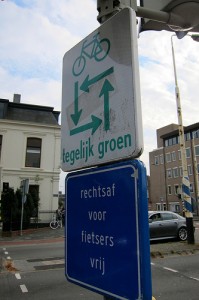 Groningen is the largest city in the northern region of the Netherlands. With 57 percent of all trips in the city made by bike, it has acquired the title "World Cycling City." In Groningen, even the large multi-lane roads have been tamed for safe cycling.

At this intersection on the main ring road around Groningen, cyclists get their own green phase. When the bike signal says go, cyclists at any point in the junction can travel in any direction, including diagonally. Engineer Hillie Talens explains how it works in this short video, which kicks off a series of Streetfilms we made on trip to the Netherlands with a delegation from Bikes Belong.

Show Transcript
<p><font size="3" face="Times New Roman">[music]</font> <br></p> <p><font size="3" face="Times New Roman"><i>Hillie Talens:</i>  [00:19] We introduced green phase for bicycles where all the bicycle directions are green at the same time because the waiting time for the bicycles is very long, especially when you want to make a left hand turn.  And by having this green phase, all the bicycles can choose in what direction they want to go, it’s all green.  It’s similar to your scramble where you have paths across the intersections and the pedestrians can use it as an all phase green for pedestrians.  And sometimes in US bicycles use that same phase to get across to the other side of the street.  How it works on the ground is like this.  So you stand waiting and you see your bicycle light turn green, then you start but you look to your left, if you can see any bicycles coming.  If they are far away you can just easily cross the street.  Most of the times because as bicycles you are in the open air, you say, oh, you go first,, oh I can’t stop, let me go first.  And then you speed up a bit and then you go first.  So you make eye contact, you talk to each other, that’s the advantage of being on a bike.  </font> <br> </p> <p><font size="3" face="Times New Roman">[music]</font></p> Transcription Sponsored by: <a href="http://transcriptdivas.co.uk">Transcript Divas Transcription Services</a>
36 Comments
Embed Code