As mayor of Bogota, Colombia, Enrique Penalosa accomplished remarkable changes of monumental proportions for the people of his country in just three years. 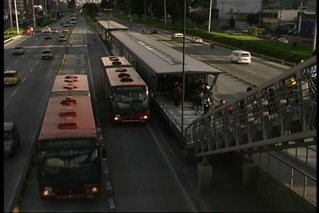 Penalosa changed the way Bogota treated its non-driving citizens by restricting automobile use and instituting a bus rapid transit system which now carries a 1/2 million residents daily. Among other improvements: he widened and rebuilt sidewalks, created grand public spaces, and implemented over one hundred miles of bicycle paths. 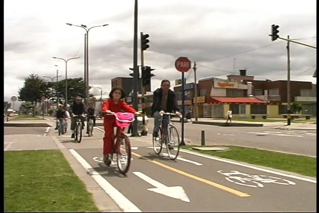 TOPP Executive Director Mark Gorton discusses with Penalosa some of these transportation achievements and asks what the future could hold for NYC if similar improvements were made here.

Show Transcript
<br> <p><font size="3" face="Times New Roman">[intro music]</font> <br> </p> <p><font size="3" face="Times New Roman"><i>Enrique Penalosa:</i> [00:11] The essence of the conflict today really is cars and people. That is the essence of the whole discussion. We can have a city that is very friendly to cars, or a city that is very friendly to people. We cannot have both. What we try to do is to restrict car use, to create public transport, to do bicycle ways, and to create public space. We took the road network and created a bus system, what is called a Bus Rapid Transit. You give exclusive lanes to the buses. This is possible because we give priority to public transport in the use of road space, so public good prevails over private transport. We created a very large bicycle network, a protected bicycle path network. When we started, bicycling was almost insignificant, zero, or 0.2% of the people in Bogotá used to bicycle, and now, nearly 5% of the people only after six years or so. What we find more and more is that good cities, one city where you would like to be at, and a city that is good for the most vulnerable citizens. I will say a city where you have many people in the street who are handicapped, where old people, where children, children by themselves. Mathematically it is totally impossible to solve the transportation problems of a city using cars. I think what changes cities are things that are different, I will almost say crazy. I believe New York could be even better. New York, for example, could turn all Broadway into a pedestrian street, all the way from [unintelligible 02:04] Bridge to the tip of Manhattan. We cannot continue to deceive ourselves thinking that to paint a little line on a road is a bikeway. A bicycle way which is not safe for an eight year old is not a bicycle way. The importance of public pedestrian space is obvious in New York. How every sidewalk is… Mayor of Manhattan and the City Council Members would be surprised how they may receive much more political benefits from these measures which are relatively cost free. We underestimate the power of dreams. I think it’s time to take a great risk suddenly and to do something new, to do the new New York.</font> <br></p> <p><font size="3" face="Times New Roman">[music]</font> <br></p> <a href="http://transcriptdivas.ca/transcription-canada/">Transcript Divas Transcription Canada </a>
3 Comments
Embed Code