In 1989, a 7.1 earthquake struck the Bay Area which severely damaged many of its elevated highway structures. The Embarcadero Freeway - an ugly, double-decked highway - was replaced with a grand boulevard which emphasizes access to the waterfront and provides people with transportation options like walking, mass transit, and bicycling instead of an emphasis personal vehicle use. In this 12 minute mini-doc, you'll see some of the dramatic changes and how all users benefit when planning takes a pedestrian and people-first attitude.

Just look at these BEFORE and AFTER shots! 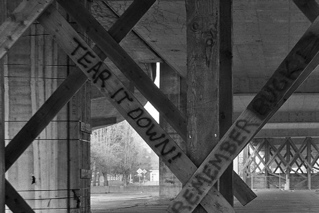