Pittsburgh Mayor Bill Peduto is putting the rest of the United States on notice. His city is on the rise, and he fully intends to keep it that way.

For the first time in over half a century, Pittsburgh is expecting an increase in residents as the number of people moving back to the city grows. Complete streets policies are high on Peduto's agenda for managing this growth and making the city more attractive. Earlier this month, the ProWalk ProBike ProPlace conference took place in Pittsburgh, and the energy of the city was on full display. So was Peduto, who was very active at the event. 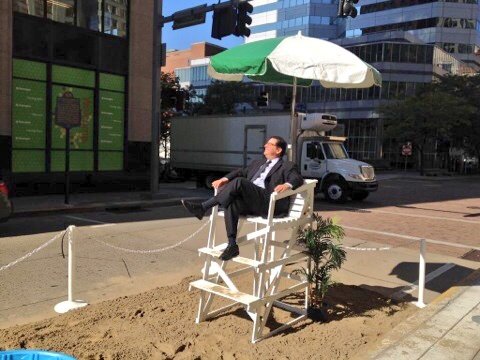 Peduto is now at the forefront of a new wave of American mayors who understand how reforming the design and function of urban streets is key to growing a city. When talking to him, it's clear right off the bat that he's well-versed in urbanism and the history of cities. Even so, he wants to learn more. This summer, he went on a study tour with The Green Lane Project to check out the best bike infrastructure Copenhagen has to offer.

Local advocates have high hopes for Peduto's administration, which has already delivered some high-profile improvements. According to the latest stats, Pittsburgh has the 11th highest bike mode share in the country, and there is solid momentum to build on that. Pittsburgh recently implemented its first true protected bike lanes downtown, part of Peduto's push to create a more multi-modal city.