Streetfilms Excerpts will help you change your community even more!

In an effort to continually help advocates, elected leaders and communities use our productions to fight for change in their neighborhoods, I am always looking for ways to manage our content better, despite only being a busy staff of one. (Yes, that's right for all those who write in weekly asking us to send Streetfilms crews places keep that in mind, it's just me!)

Over the last few years we have done some extremely popular Streetfilms, but some from other countries have been lengthy and harder for advocates to use the specific lessons contained in the middle. A few months ago I took our Zurich film and excerpted a few segments ("The Historic Compromise" & "The Zurich Traffic System") which I've gotten great feedback on. I also did one on Buenos Aires' 10km/h shared streets.

So today starts a new era at Streetfilms. If I produce a film of a long length and I think there might be value in shorter segments - you'll see them. My newest epic film from Stockholm (13 minutes) has great segments and I kept it in mind while editing that I'd break it down into shorter, more useable modules. And thus, viola! Here are four short segments with valuable lessons to use.  Including how walkable Zurich is in the downtown, how successful congestion charging has been, the current bicycling climate there and looking at how Stockholm is moving beyond their Vision Zero campaign to make streets even safer. 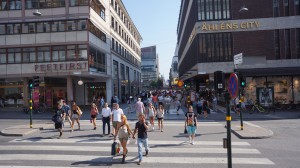