by on March 23, 2010 | 10,077 Plays
Email Share
While we were down in Washington, DC for the National Bike Summit, Streetfilms got the chance to check out some of the innovative bike infrastructure.
Tops on our list: the city's first protected, contraflow lane for bicyclists. The district DOT has redesigned 15th Street NW between U Street and Massachusetts Avenue to accommodate two-way bike traffic on a one-way street. Northbound cyclists get a shared lane moving in the same direction as car traffic, and southbound cyclists ride in a parking-protected lane. The treatment has also slimmed down the street, removing a vehicle lane and calming traffic.
DC transportation officials say that when designing this protected bike lane, they looked to New York and Montreal for inspiration. Additional use of contraflow lanes could help make critical new connections in New York's bike network, like the gap between Park Slope and Fort Greene that Brooklyn CB 2 recently asked DOT to take a look at. Although not captured in the video DC has just finished a lower tech contraflow lane on Champlain Street in Adams Morgan (See images below). So hopefully some of that inspiration will flow back up the Acela corridor to NYC. 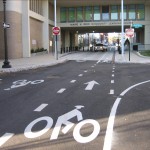 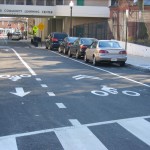 Show Transcript
<blockquote class="_text"> [music] Narrator: [0:08] We had a big one way street, four lane, and we wanted to figure out how we could get a bike lane on there, but also allow for two way bike traffic. So one option was just to put a bike lane going in the same direction as traffic, with pain. We thought, "No, let's take a whole car lane and make it go the other direction."</p><p>[musical interlude] </p><p>Narrator: [0:32] Like we see sometimes in New York and Montreal, they moved the parking over from the curb about eight or nine feet, and then that became the bike lane. And then, for the other bikes who want to go the same direction as cars, they can share the right lane, because we still have three lanes on that street. </blockquote> <blockquote class="speaker_1_text"> <cite class="speaker_1" >Gabe Klein:</cite> [0:47] We did a lot of studies, and we looked at it. We realized we could take an entire lane out without affecting throughput for automobiles, at all. [musical interlude] </p><p>Narrator: [0:57] We have special signs at each intersection warning drivers, when they turn, to look for bikes.</p><p>[musical interlude] </p><p>Narrator: [1:08] So the contraflow aspect of this helps us get two way bike traffic on a one-way street. We're looking at that in other parts of the city, too, where we may have a short block or two where bicyclists, frankly, they're already riding. </blockquote> <blockquote class="speaker_1_text"> <cite class="speaker_1" >Gabe Klein:</cite> [1:19] And as we all know, when you shrink the width of the road, you calm traffic. </blockquote> <br/><br/>
24 Comments
Embed Code